From an underwater prison to a sports competition, where people compete to perform a full 360° rotation on a swing, Estonia does not cease to amaze. Discover 5 things that you will only find in Estonia, or almost, because you can't be sure without knowing all the countries in the world in a deep way, even so they are things that are not at all common. 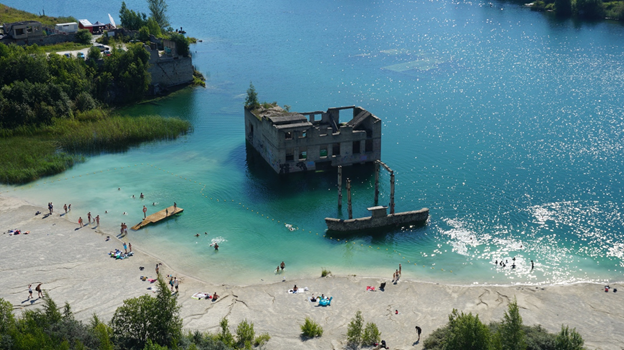 In the past, the small village of Rummu used to be associated with an infamous forced labor penal institution where 7000 prisoners mined limestone. To prevent the deepening quarry from being flooded, water was pumped day and night.

About a decade after the collapse of the Soviet Union, the process of relocating the prisoners and closing the quarry began. When the prison was abandoned, there was no need to continue pumping water, and the quarry, which gradually filled with water, ended up turning into a lake that consumed the abandoned buildings, machinery, trees and all the infrastructure.

It is a hidden paradise with beautiful views and refreshing waters where you can swim. There are also activities like stand-up paddle boarding, scuba diving, snorkeling and there's a beach bar (of course, it's Estonia!)

For every 100 women in Estonia, there are 87 men – only the Northern Mariana Islands, a US Pacific territory with a population of about 50,000, has a smaller percentage of men. However, this difference only starts from the age of 55 because Estonian women live on average almost 10 years longer than men.

In 1950, approximately 57% of the population was female, while 43% was male. The reason for this was the large number of men who were killed in wars during the first half of the 20th century, which was particularly high throughout the Soviet Union (Estonia is a former Soviet state), as well as a very high life expectancy. greater among women.

Men's shorter life expectancy is to be expected as they are more risky and are often employed in physically demanding and unhealthy work. There is also a higher incidence of unhealthy lifestyles among men such as alcohol consumption and smoking.

Throughout its history, Estonia was occupied by several countries – Germany, Sweden, Denmark and Russia – which ended up influencing its cuisine, among many other aspects.

So what kind of food do Estonians eat? Estonian food is hearty, healthy and full of seasonal flavors.

Traditionally, the diet of Estonians is based on pork, chicken, fish, sausage and sauerkraut. Potatoes add a generous dose of carbs that warm the body in winter. Sour cream is served with almost anything. There is a generous selection of delicious pastries, for example sweet rolls, chocolate and marzipan.

Other favorites are black bread, black pudding, kama (a mixture of roasted barley, rye, oats and pea flour), meat jelly, and a variety of porridges and soups.

4. Free public transport in the capital

Since the beginning of January 2013, Tallinn is the first capital of the European Union to offer free public transport to its residents.

Since the introduction of free public transport, a significant increase in the number of registered residents in Tallinn can be observed.

4. The balance of the village 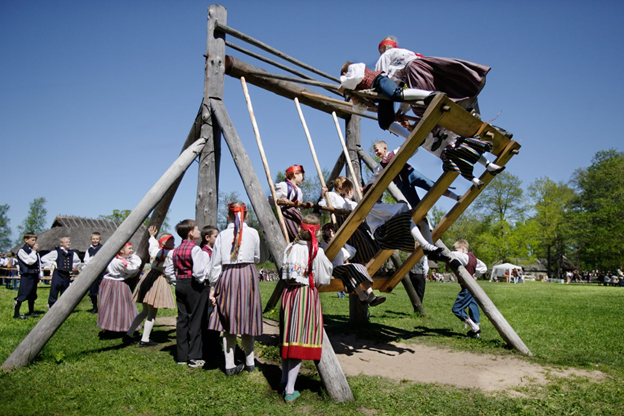 The practice of swinging has been present in Estonian culture for a long time, but its origin is not known.

The sports swing was invented in Estonia in 1993, in which people compete to perform a full 360° rotation with this swing.

This practice is also part of the traditions of Midsummer's Eve (the night of June 23).

One more interesting than the other, isn't it? Which of these things have you seen in another country or even in Estonia? Tell us in the comments. Or even better, which one left you wanting to visit this wonderful country?

Doubts about changes in the regulation of Portuguese nationality for Sephardim

The recent changes in the regulation have raised many doubts in those who are seeking Portuguese nationality for the Sephardic people. Knowing […]

Changes in the regulation of Portuguese nationality law for Sephardic descendants

Follow here all the updates on the recent changes in the regulation of the Portuguese nationality law for Sephardic descendants. 18 […]

Note of clarification: Portuguese nationality by the Sephardim

As expected, the amendment to the Portuguese nationality regulation will be published in the coming days. Therefore, very soon, we will have knowledge […]